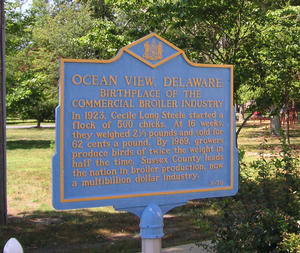 The Town of Ocean View was incorporated on April 13, 1889. Formerly known as Hall’s Store, the first Town Council meeting was held on April 20, 1889 with nine elected council members. The history of Ocean View, however, dates back to the colonial era. The present site of Ocean View was originally a tract of 500 acres known as “Middlesex” and granted to Matthew Scarborough under the authority of “Charles, Absolute Lord and Proprietary of the Provinces of Maryland and Avalon, Lord Baron of Baltimore.”

Following Mr. Scarborough’s death, his land passed into the hands of the Hazzard Family and then into the hands of the Hall family. It was the Hall family who founded the Town of Ocean View. Shortly after 1800, W.S. Hall opened a store on his farm near White’s Creek, which was a portion of the old Middlesex Plantation. Following the establishment of the general store, the area became known as Hall’s Store. The village that sprang up around the store was composed of families of farmers, watermen, and seamen. In 1822 a post office was established. Following the War Between the States, the name of the village was changed to Ocean View as people discovered the near by beach areas for recreation. It is said that in the late 19th Century one could see the Atlantic Ocean from the second stories of many of the homes in the village.

In 1923, Mrs. Cecile Long Steele raised her first flock of broiler-fryer chickens for commercial consumption establishing Ocean View as the birthplace of the commercial broiler industry. This is Delaware’s number one agricultural enterprise.

Although Ocean View is no longer engaged in the commercial growing of chickens, the village has evolved into a residential beach front community that attracts thousands of visitors during the summer season. With a population of 1,882 year round residents, Ocean View in the 21st Century has become a delightful and wonderful Town conducive of a peaceful small town lifestyle.

If you are interested in preserving the history of Ocean View, click on the link below to be directed to the Ocean View Historical Society's website.